Following is a detailed description of how I setup and maintain my web site.

DokuWiki, a Wiki software that is written in PHP is the core component of the entire system. Everything else depends on DokuWiki's it's simplicity and the way it stores the data (Wiki articles).

Article content of the DokuWiki is stored in plain text files, therefor making it as readable quick reference files even without a web server to render the HTML.

Plus, since DokuWiki doesn't require a database or any other support software, even a low end computer running a light weight web server (i.e. Nginx, Lighttpd) can host a local web site for off-line view.

Since this web site doesn't use all the features that are bundled with the DokuWiki, I have striped out unused features and using it only as an engine to convert and render HTML for the content that is in Wiki syntax.

Although Dropbox is a closed source proprietary service and has not so perfect track record when it comes to security, for this setup it is an adequate solution. And since it does what it do best (synchronizing files between multiple devices) I choose to overlook it's closeness.

VPS hosting service provider that provides a very flexible platform to build up a server for our needs almost from scratch.

Sudaraka.Org is hosted on a Debian server on Linode, which gives me the option to install and configure Dropbox daemon for Linux.

In order to maintain the complacency with the license of DokuWiki (GNU GPL v2), I have published by modification in a public GIT repository hosted at Gitorious.

Theme used is this website is also available on a separate GIT repository under GNU AGPL v3. 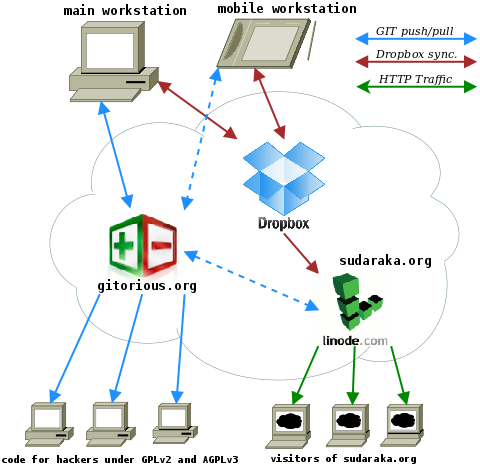 Website is configured to run on Apache, and everything under the web root except for the cache and meta data is under version control using GIT.

Local GIT repository has the Gitorious repository configured as remote/upstream.

Web root is also symlinked to a directory under ~/Dropbox which is make the code, data and the local GIT repository to be automatically synchronized into the Dropbox cloud storage.

I do go out once every couple of months or so, in such occasions I like to have my web site with me as a quick reference even when I'm off-line.

I simply have Dropbox software installed on my netbook and entire website is with all the recent modifications is there automatically. A simple text editor (or even cat) can be use to view the articles, to get the full glory of my website I run a web server on this machine also.

Since Dropbox also brings the local GIT repository with it, I can also make any modifications to the code here and push them to Gitorious.

Dropbox daemon is installed on the server and is started on the boot which automatically bring modifications I do on the workstations on to the server.

Sudaraka.Org by Sudaraka Wijesinghe is licensed under a Creative Commons Attribution-ShareAlike 4.0 International License.
Based on a work at https://bitbucket.org/sudaraka/sudaraka.org/.
Permissions beyond the scope of this license may be available at Terms & Conditions.

This program comes with ABSOLUTELY NO WARRANTY; This is free software, and you are welcome to redistribute it and/or modify it under the terms of the BSD 2-clause License. See the LICENSE file for more details.

Get the source code from Git repository.