Sudaraka Wijesinghe is a freelance programmer, who work primarily on web based projects using JavaScript and PHP. During the period of 2000 to 2007, Sudaraka worked for several local software development companies in Sri Lanka, including a company he co-founded in 2005.

As an enthusiast of FLOSS and free culture, Sudaraka's goal is to study and advance in the related areas and contribute to free/open projects within his capacity.

From childhood Sudaraka has been interested in the areas of Electronics, Astronomy and Computers, and later choose Software Development as a career. From there on his professional experience is mostly based on computer programming.

Sudaraka first went into be a full-time freelancer after leaving E Commerce Technologies in the end of 2003, and worked as a freelancer until mid 2005 when he co-founded the eLLuminant Solutions. Two years later Sudaraka again decided to go back into be a freelance programmer and working as one from ever since.

For details on Sudaraka's freelance projects, see articles under the Portfolio section.

Sudaraka co-founded eLLuminant Solutions with his friend and colleague Sudheera Weerakoon in 2005. Primary goal of the company was to provide support for the VoIP billing platform of Emergent Network Solutions, Inc. which was later acquired by Stratus Technologies, Inc.

eLLuminant Solution was a small software development house with a team of about 5 programmers. Apart from the main project mentioned above, eLLuminant Solutions also developed web based Accounting and Shopping solutions for local and foreign clients.

Sudaraka eventually decided to leave the company as it took too much of his time, and the decision finally lead to close of business for eLLuminant Solutions in September, 2007.

A subsidiary of iDial Networks, Inc. based in Texas USA, is a software development company that created and maintained the software for prepaid phone cards and VOIP services operated by the parent company. The software was based on Microsoft® platform and was programmed using Visual Studio v6 suite. 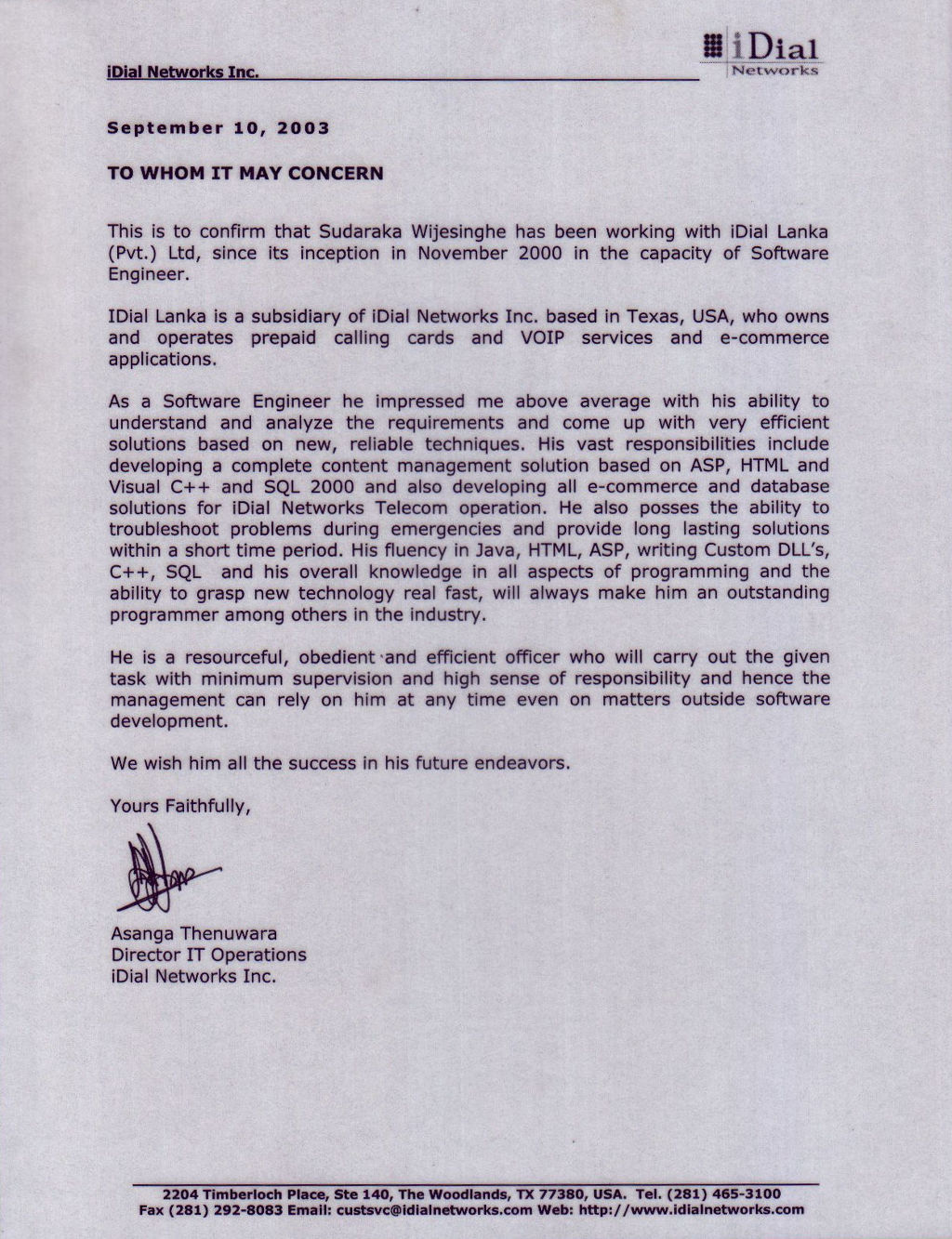 Sudaraka joined the company as a trainee and was promoted to the position of Software Engineer with in 6 months. During the time of his service at iDial, Sudaraka was involved in many solo projects and lead development of some team projects.

In mid 2003 Sudaraka left the company due to some issues with the local management. During this time the parent company iDial Networks, Inc. was acquired by GlobalNet, Inc. and as a result, operations of the Sri Lankan branch was shutdown.

A maintenance contract of the companies software and services was offered to Sudaraka in late 2003, which turned his career into the direction of freelancing.

(GlobalNet, Inc. also went out of business around 2006)

During the short stay at E Commerce Technologies, Sudaraka worked on a CRM application developed on Microsoft® .Net platform.

As the first formal employment of his life, Sudaraka worked as a tutor of Visual Basic programming language.

For primary and secondary education, Sudaraka attended D.S.Senanayake College at Colombo. Sudaraka maintained above average grades during the primary education period and received excellent result on his GCE O/L examination in 1996, including distinctions on core subjects among which are Mathematics, Science, Commerce & Accountancy and First/Second Languages. (Overall Six distinctions and two credits).

However, Sudaraka sat for the GCE A/L examination in 1999 which returned unsuccessful result with only a simple pass in the subject of Physics.

In late 1999 Sudaraka enrolled for a Diploma course in Computer System Design at the National Institute of Business Management (NIBM). Sudaraka completed the course and the compulsory project, however did not archive the required grades for the certification. Without perusing it further Sudaraka dropped out of NIBM in 2001 and continued self-studying and research, and also started his career as a computer programmer. 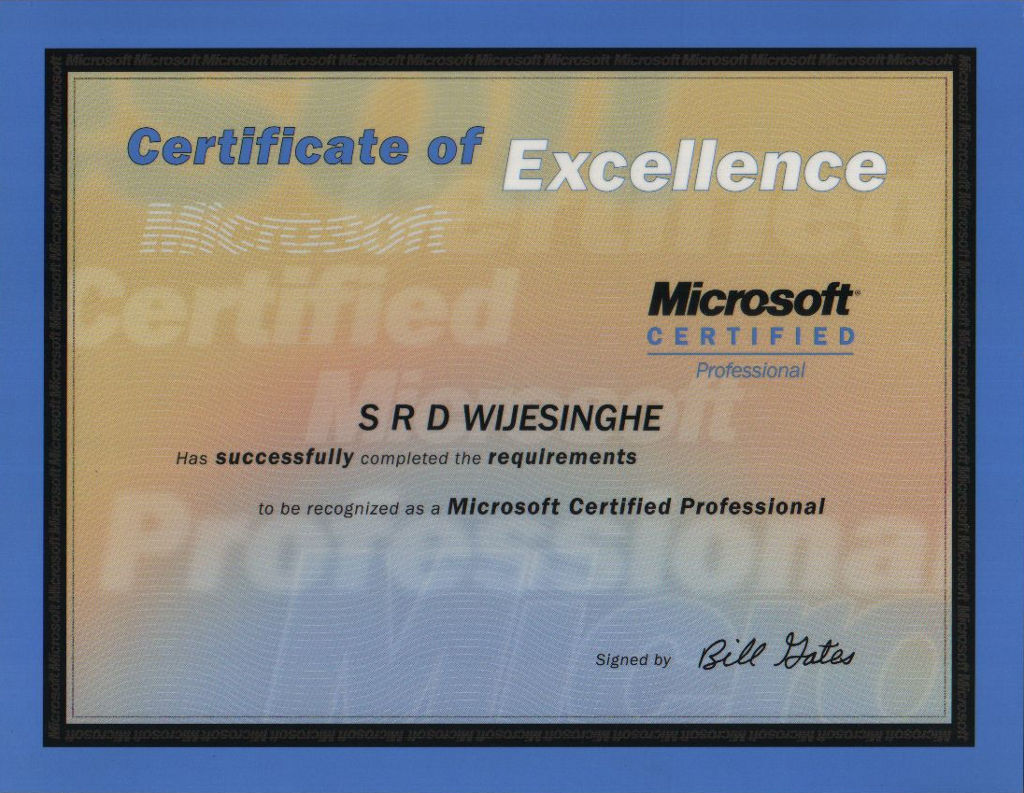 Another stage of formal education in Sudaraka's life was in 2002, when the company he was working for (iDial Lanka) offered him a grant for the Microsoft® certification program. Sudaraka archived the MCP status, however did not peruse remainder of the certifications. (Today as a FLOSS lover Sudaraka is not that proud of this achievement.)

In general Sudaraka is not a fan of conventional class room education, from the childhood he preferred Learning-by-doing approach. Although Sudaraka distanced him self from "formal education", he continues to self-study and research on the subjects of Computer Programming and Electronics.

Sudaraka has an unorthodox and sometimes controversial personality. And the history has proven that he is more successful as an individual than in a team. For more details on Sudaraka, please see the About Sudaraka Wijesinghe page.

Sudaraka Wijesinghe certify that to the best of his knowledge and belief, the information provided in here correctly describes himself and his abilities, and also acknowledge that any willful misstatement described herein may lead to termination of any contracts agreed up on or based on the content of this Résumé.

IMPORTANT: Content of the this Résumé page carries a special license instead of the general content license of this web site.

Sudaraka.Org by Sudaraka Wijesinghe is licensed under a Creative Commons Attribution-ShareAlike 4.0 International License.
Based on a work at https://bitbucket.org/sudaraka/sudaraka.org/.
Permissions beyond the scope of this license may be available at Terms & Conditions.

This program comes with ABSOLUTELY NO WARRANTY; This is free software, and you are welcome to redistribute it and/or modify it under the terms of the BSD 2-clause License. See the LICENSE file for more details.

Get the source code from Git repository.